The Church of Scientology of Los Angeles carries out a community clean-up in East Hollywood.

Bright and early on Saturday morning, 30 volunteers gathered at the Church of Scientology of Los Angeles with one common goal: to clean up the streets of Hollywood and make it brighter, happier and safer for the whole community. They split into teams, grabbed brooms, gloves, trash bags and launched. They picked up trash along Hollywood Blvd from the historic Vista Theater all the way to Vermont Ave and back, cleaning up both sides of the street. And here is why:

Illegal dumping of trash on the streets of Los Angeles has increased by 450% in the last four years, according to a report by the LA Controller. The trash is piling up because nearby homeless encampments no longer get regular clean-ups by the city. And so, multiple trash heaps can now be spotted in neighborhoods that have homeless encampments.

A recent poll reported in LA Weekly magazine  shows homelessness is the number one concern for citizens in Los Angeles. According to the Los Angeles Homeless Services Authority in June 2020, there were an astonishing 66,436 unhoused people in LA — a 12.7% increase over the previous year, and second highest in the country next to only NYC.

The Church of Scientology of Los Angeles proudly sponsors The Way to Happiness, which is a nonreligious, common sense guide to better living. The volunteers are following a precept from the booklet, “Safeguard and Improve your Environment.” It reads:

“Care of the planet begins in one’s own front yard. It extends through the area one travels to get to school or work. It covers such places as where one picnics or goes on vacation. The litter which messes up the terrain and water supply, the dead brush which invites fire, these are things one need not contribute to and which, in otherwise idle moments, one can do something about.”                        — L. Ron Hubbard

Over 500 copies of The Way to Happiness were passed out in the neighborhood, while the volunteers industriously cleaned up 390 cubic feet of trash!

Needless to say, people were very thankful — neighbors, business owners, pedestrians, even homeless people showed their appreciation. Some even decided to join in and help!

A worker at a local car wash immediately recognized them as the “Way to Happiness people.” He then expressed his gratitude for the volunteers and what they were doing.

A manager at a local grocery store was really impressed and made the comment “If everyone just did one small act to help make things better, we would be in much better shape. Thank you guys for what you are doing!”

These are just a couple of examples of the many who showed their appreciation. And yes, by lunchtime the boulevard was sparkling on both sides — from the corner of Vermont, all the way down to the Vista! 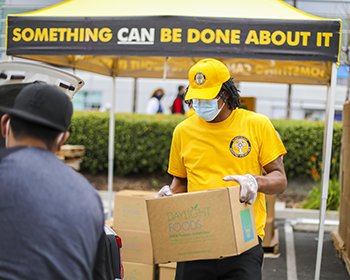 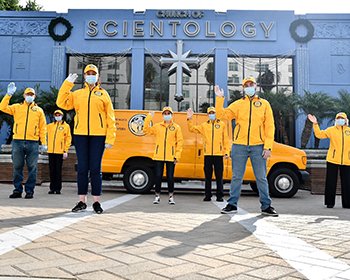 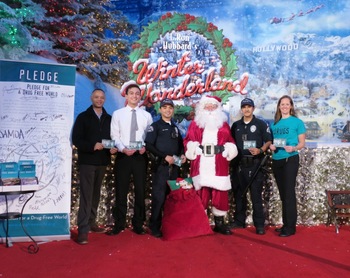